Wall Street Journal: Fenway Park Lefties Are Not All Right

Posted on March 7, 2017 by Campaign Outsider

While Red Sox Nation might be sold on newly acquired pitching ace Chris Sale, the Wall Street Journal’s Michael Salfino is decidedly not.

Fenway: A Monster for Lefties 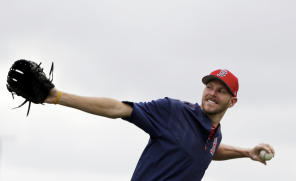 The Boston Red Sox were desperate to add an ace this offseason and on paper Chris Sale fits the bill perfectly. But after acquiring the five-time all-star from the White Sox this winter for two top prospects one big worry remains: Will Sale be the latest lefty to be swallowed up by The Green Monster? 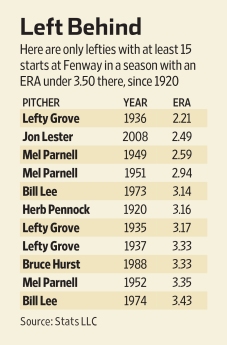 Helpful history: “Yankees great Lefty Gomez likened his games at Fenway to ‘pitching in a phone booth.’ Another New York legend and fellow Hall of Famer Whitey Ford famously didn’t want to pitch there at all, hurling just 87.2 innings in Boston (12 starts) versus 246.1 against the Red Sox at Yankee Stadium (31 starts). And Ford had good reason to skip that venue whenever possible, posting a 6.16 ERA in Boston (his ERA against those same Red Sox at home: 2.16).”

Sale has made only three career starts at Fenway and allowed nine runs in 19.2 innings (4.22 ERA). Given the park’s history and the history of left-handed pitching there, it’s curious as to why the Red Sox have paid such a hefty price for two of the game’s top left-handers. While Sale makes $12 million this year versus $30 million for Price, according to Spotrac, he cost the team two of the most coveted prospects in all of baseball in the December trade with Chicago, according to MLB.com: top-overall minor leaguer Yoan Moncada, an infielder, and 30th-ranked righty Michael Kopech.

Clearance Sale, anyone? Discuss among yourselves.

2 Responses to Wall Street Journal: Fenway Park Lefties Are Not All Right