Hockey lost one of its Mt. Rushmore figures when Gordie Howe died this week at the age of 88. 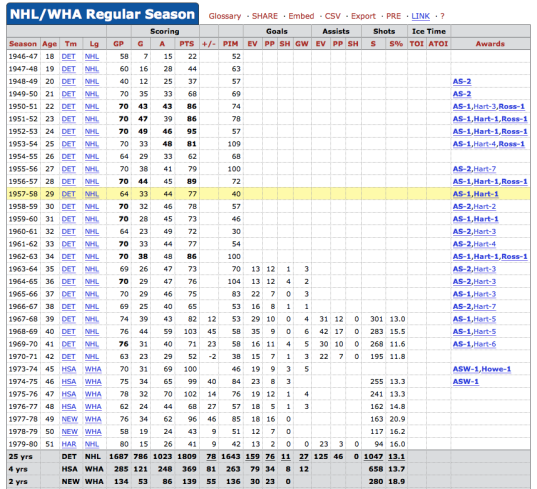 Part of Howe’s legacy – he was remarkably nice off the ice, but accumulated almost 1700 penalty minutes during his career – was the Gordie Howe Hat Trick: one goal, one assist, one fight.

Gordie Howe last played in the NHL in 1980, when he posted 41 points in 80 games with the Hartford Whalers at the age of 51. But his impact is still felt throughout the league.

When he walked into an NHL dressing room, as he did in March when he celebrated his 88th birthday in Detroit, a hush often came over the room. All attention turned to him as today’s players shook his hand and exchanged hellos.

He didn’t command respect, but it was given to him freely by players of all generations who appreciated his place in the sporting landscape.

They understood his impact, an impact still felt today in these five areas . . .

Howe had his first one on Oct. 11, 1953, and it’s still considered an honor for a player to pull off this feat.

Howe scored 975 goals between his NHL and WHL career. His 801 goals in the NHL are second only to Wayne Gretzky, who scored 894. Howe assisted on 1,383 others, but only dropped the gloves 22 times during his career. Yet, despite scoring a goal, registering an assist and fighting an opponent in the same game just twice over 32 years, the feat is forever memorialized as a Gordie Howe hat trick.