These Are the Saddest of Possible Words: Rafa to Rahfa! to Feh

Posted on September 5, 2015 by Campaign Outsider

With apologies to Franklin Pierce Adams

In the swift decline and fall of Rafael Nadal, this was the worst.

Last year he was Number One in the world. Last night he was just numb.

In his third-round U.S. Open match with Fabio Fognini, who’s long been a guaranteed first ballot entry into the Douchebag Hall of Fame, Nadal led 6-3, 6-4, 3-1. But when Fognini broke back to 3-3, you could tell that the Italian really believed he could come back from two sets down and beat Nadal, something no one else has ever done.

And you could tell the Spaniard believed it too.

All you need to know in the end is this: Fognini (described elsewhere as “hardly known for mental fortitude”) had 70 winners and 58 unforced errors; Nadal 30 and 18. As one news report had it, Nadal didn’t lose the match – Fognini won it.

Regardless, It was surpassing sad to watch, which the hardflinching staff did until 1:30 am.

(You can watch the lowlights here if you like.)

Hard to see how Nadal comes back from this loss.

Postscript (via The Guardian):

“He’s a player with a great talent, with huge shots, and he played amazing shots,” Nadal said afterward. “But what I am 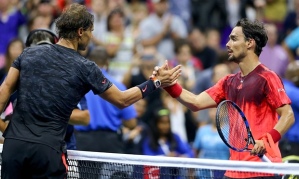 doing worse is playing worse than what I used to do the last couple of years. That’s it.

“We can be talking for one hour trying to create a reason. But the sport for me is simple, no? If you are playing with less confidence and you are hitting balls without creating the damage on the opponent that I believe I should do, then they have the possibility to attack.”

“Is another loss,” [Nadal] said. “Not tougher. As I tell, you know, my mind allows me to fight until the end. Is something that I was missing for a while, that feeling that I am there.

“For the nerves, for the anxious that I had for a long time this season, I was not able to do it. I was not able to be fighting the way that I was fighting today. So is an improvement for me. I take that like a positive thing and I know what I have to do. I going to work on it.”

No doubt he will. Just not sure we can stand to watch it.

This entry was posted in Uncategorized and tagged Douchebag Hall of Fame, Fabio Fognini, Rafael Nadal, The Guardian, U.S.Open. Bookmark the permalink.