Taking the ‘Mum’ Out of Mumia Abu-Jamal

And don’t be surprised if  Abu-Jamal himself weighs in, thanks to a new federal court ruling this week. Associated Press report (via the Delaware County Daily Times): 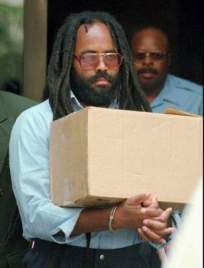 HARRISBURG, Pa. >> A federal judge Tuesday threw out a Pennsylvania law designed to prevent offenders from causing mental anguish to crime victims, calling it an illegal restriction on the right to free expression.

U.S. District Judge Christopher Conner ruled against the law that was enacted quickly late last year after Mumia Abu-Jamal gave a recorded commencement address to a small Vermont college. Abu-Jamal is serving life for the 1981 killing of Officer Daniel Faulkner in Philadelphia.

Conner wrote this: “A past criminal offense does not extinguish the offender’s constitutional right to free expression. The First Amendment does not evanesce at the prison gate, and its enduring guarantee of freedom of speech subsumes the right to expressive conduct that some may find offensive.”

Coincidentally (or not), this ad ran in yesterday’s New York Times. 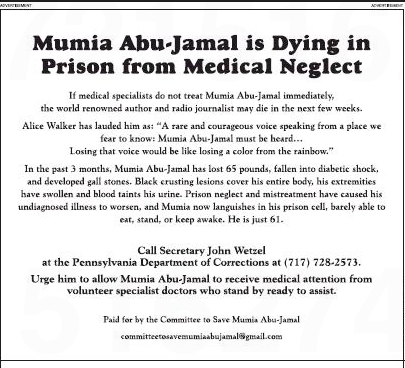 So, the Committee to Save Mumia Abu-Jamal has spoken.

We’ll be interested to see if he follows suit.

2 Responses to Taking the ‘Mum’ Out of Mumia Abu-Jamal