The hardworking staff has long been an un(L)abashed fan of Weekly Standard feature writer Matt Labash, and his latest piece makes us even more so.

From the moment his dead-of-night emails, texts, and encrypted Wickr messages start flooding my inboxes like a storm surge, it’s clear that Thor Halvorssen, who keeps vampire hours, is not your average clock-punching do-goodnik.

The 39-year-old Halvorssen is president of the New York-based Human Rights Foundation (HRF), which he launched in 2005. Half-Norwegian, half-Venezuelan (born and raised in Caracas, he speaks accentless American English), he descends from 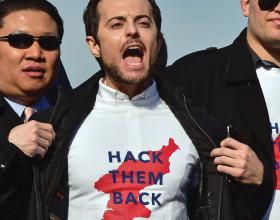 assorted swashbucklers and heads of state. His paternal grandfather Øystein, who was the Norwegian king’s consul in Venezuela during World War II, diverted all of Norway’s merchant fleet to Venezuelan ports when the Germans invaded his homeland, then had a fistfight with a couple Nazis when they stopped by to object. His mother is descended from the first president of Venezuela, Cristóbal Mendoza, as well as from Simón “The Liberator” Bolívar, the statesman/military leader who helped win Latin America’s independence from Spain. For Thor, as for his forebears, human rights and individual liberty are not something that should be on the table in any discussion, they are the table upon which all other discussions rest.

Halvorssen is a second-generation protestor: “[His] father was tortured in a Caracas prison. His mother was shot in an anti-Hugo Chávez demonstration. His first cousin Leopoldo López—a perpetual challenger of the Chavista regime that failed to die with its namesake—is currently gutting it out as a political prisoner in a Venezuelan jail.”

And Halvorssen, who founded the Human Rights Foundation, is deep into the family business, fighting dictatorships the world over – especially in North Korea, an effort Labash chronicles in sometimes excruciating detail.

But the one who gets me—who gets everyone—is Ji Seong-ho, who runs a group called Now, Action, Unity, and Human Rights. He’s 34 years old but appears about 19. He has an artificial hand that looks like a mannequin’s. He’s missing part of one leg, too. When he crossed the Tumen for the first time, it wasn’t to defect, but just to secure food. (He lost his grandmother to starvation during the ’90s famine.) He noticed that the Chinese fed their dogs better than most North Koreans ate. When he returned, authorities snatched him, confiscated his rice, and tortured him. Another person was arrested along with him but didn’t get beaten as badly, since the government has a special distaste for the disabled. (Some witnesses say the DPRK conducts experiments on them.)

Compelling as this is, Ji blows through the details of his life as most of the defectors do: quickly, as though he doesn’t want to impose on us.

Halvorssen has been launching balloons into North Korea to deposit leaflets, money, and – yes – DVDs of The Interview. Labash’s piece ends with the rabble-rouser contemplating the potential of using drones for the job.

Thor Halvorssen is a remarkable character, and Matt Labash’s profile of him is compelling journalism.

Not to mention a lead-pipe cinch for the next round of David Brooks’s Sidney Awards.