Don’t Free the Pete Rose One!

Full disclosure: In another life, the hardworking staff did seven years in Ohio.

Specifically, we were in Cincinnati from 1967 to 1974, and the one thing that kept us sane was this miniature Brooklyn Bridge across the Ohio River to Kentucky. 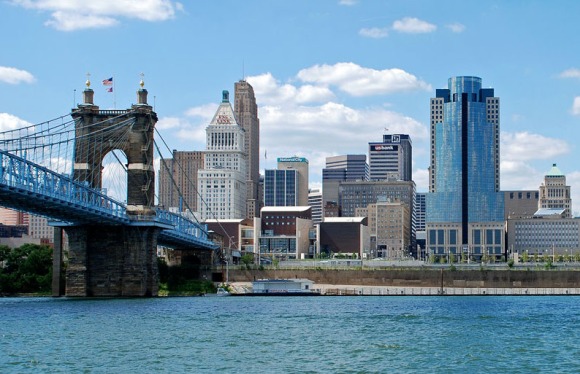 It’s known as the Singing Bridge because of the hum you hear as you drive across its metal grid roadbed. More important, it was John Roebling’s starter bridge before he (and his son and – especially – his daughter-in-law) built its lookalike in Brooklyn in the waning years of the 19th century. The Brooklyn Bridge was, at its opening in 1883, the tallest structure in the Western hemisphere and the longest span in the world: 1,600 feet from tower to tower.

(Fun fact to know and tell: On May 17, 1884, P. T. Barnum led 21 elephants over the Brooklyn Bridge to prove that it was stable. For the whole fascinating story, read The Great Bridge by David McCullough, who was once described as “the Herodotus of Hydraulics.”)

Rudely transplanted to the Queen City from 89th and 3rd, we spent roughly two years sitting on the banks of the Ohio River and staring at the Singing Bridge.

The absolute worst thing about living in Cincy back then was The Big Red Machine, the insufferable Cincinnati Reds of the 1970s.

From the Encyclopaedia Britannica:

—under the guidance of manager Sparky Anderson—won five division titles in the first seven years of the decade. The Machine’s first two trips to the World Series ended in disappointment, however, as it lost to Robinson’s Orioles in 1970 and the Oakland Athletics in 1972, which was followed by a surprising loss to the underdog New York Mets in the 1973 NL Championship Series. The years of frustration ended in 1975, when the Reds won a remarkable 108 games and beat the Boston Red Sox for the franchise’s first World Series title in 35 years. While the 1976 Reds won six fewer games than their 1975 counterparts, they led major league baseball in all the major offensive statistical categories and swept both teams they faced in the postseason en route to a second consecutive championship, leading a number of baseball historians to claim that they were the second greatest team ever, after the famed 1927 Yankees.

Which, of course, is a bunch of baloney because the second greatest team ever, after the famed 1927 Yankees, is the famed 1961 Yankees.

The point is, the Cincinnati Reds player most hateful of all to this Made Yankee Fan was the reptilian Pete Rose, who was rightfully banned from the Baseball Hall of Fame for betting on baseball games.

Pete Rose has applied for reinstatement; Rob Manfred is considering it

This is not the most surprising news in the world, but the Commissioner taking it seriously and commenting on it is at least somewhat notable compared to how Bud Selig handled it for 20 years (i.e. with almost complete silence): 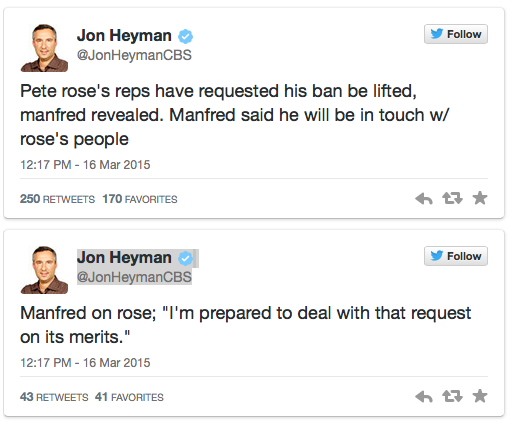 As I wrote recently, it’d be a pure act of charity for Major League Baseball to even listen to his case because, really, it doesn’t have to. Indeed, we’re to a point in time where “the merits” aren’t as likely as big an issue with Major League Baseball as the fact that, at some point, Rose is just too damn old to be a nuisance anymore and the league can afford to show some mercy if it wants to.

8 Responses to Don’t Free the Pete Rose One!