Posted on February 18, 2015 by Campaign Outsider

Well the Missus and I watched the doggies at the 139th Westminster Kennel Club Show the past two nights and say, it was swell.

But we never expected it to be.

For starters, we couldn’t stand half of the seven finalists. The favorite, a Portuguese water dog named Matisse, just seemed kind of creepy.

Then there was the simpering shih tzu “Rocket,” owned by Patricia Hearst-Shaw (yes, as the announcers said, that Patty Hearst). 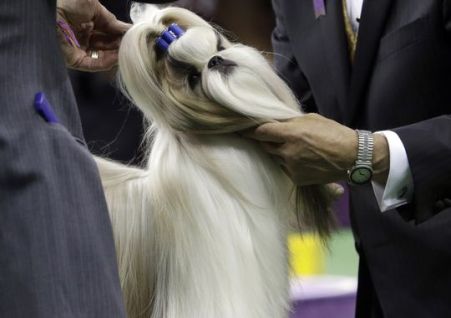 And, of course, the ever repulsive French poodle.

A Regal Beagle Seizes the Spotlight

It took 20 minutes for David Merriam, the Best in Show judge at the Westminster Kennel Club Show on Tuesday, to give the dog-loving audience at Madison Square Garden a bit of a shock. After a devilishly long route to making up his mind — he seemed to enjoy building the suspense, smiling a bit impishly as he

deliberated — he made the surprising choice of Miss P, a 15-inch beagle and the grandniece of Uno, the first beagle to ever win the big show, in 2008.

Merriam, a retired, white-haired California trial judge, ignored the crowd’s favorite, Swagger, an Old English sheepdog, and two other dogs who were believed to be likelier winners than the nearly 4-year-old Miss P: a Skye terrier named Charlie and a Portuguese water dog with the artistic sobriquet of Matisse. Merry Miss P was not the name on everybody’s snout.

6 Responses to Westminster Kennel Club Dog Show: What the-!