Posted on December 18, 2014 by Campaign Outsider

From our Late to the Shooting Party desk

The headscratching staff yields to no man in our admiration for Boston Globe sports scribe Amalie Benjamin, but her game report yesterday cannot go unnoted.

NASHVILLE — At other times, in other situations, the Bruins’ 3-2 shootout loss to Pekka Rinne and the Predators would have represented a good outcome. It was a road point against the best goaltender in the NHL, a chance to keep moving up in the 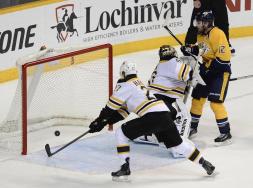 standings despite facing a team that had gone 11-2-1 at Bridgestone Arena this season.

Boston, now with two teams (Panthers, Rangers) between it and the final wild-card spot, is in desperate need of two-point games. The Bruins fell just shy on Tuesday night, with a Derek Roy score past Tuukka Rask providing the margin in the shootout.

Wild-card spot? The Bruins are thirty-two games into an 80-game season.