Posted on December 4, 2014 by Campaign Outsider

In the wake of the New York grand jury’s decision not to indict Officer Daniel Pantaleo in the choking death of Eric Garner, the hardworking staff noted similar treatment by two editorial cartoonists. 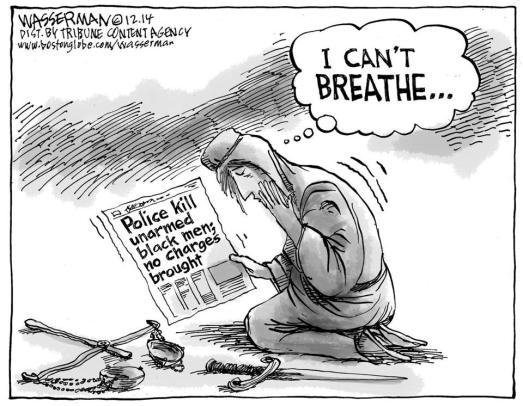 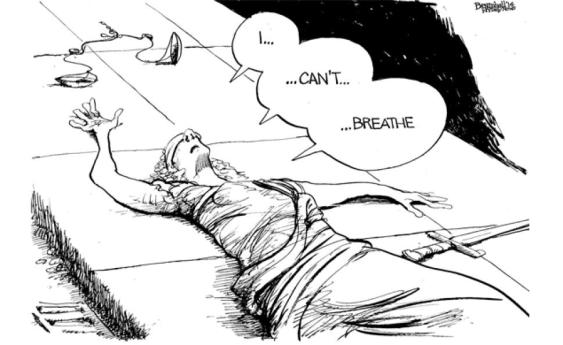 We figured there must others along the same line, but we didn’t find any. We did, however, come across this Poynter piece in which Benjamin Mullin  talked with the two cartoonists.

“I was finishing up a completely different cartoon on the hacking of Sony when the news of the non-indictment broke. I went back and watched the video of Garner being choked to death by the police, and the cartoon idea grew out of that horror.”

“…I think that, for certain galvanizing events, cartoonists seek out a simple, distilling image or phrase. Here you have a sense of great injustice together with the agonizing plea by Garner (“I can’t breathe.”) No big surprise that several cartoonists melded those elements in similar ways.

“In the Garner case, it’s a no brainer to link his last words with another icon, an expiring lady justice. My guess is that by the end of today even more editorial cartoonists will have done a similar one.

As for my ‘process’, I’m not sure I have one. The best ideas come to me unbidden, without my having to hunt for them, which was the case yesterday afternoon. I try to pare any cartoon down to as few words as possible. My ideal, rarely achieved, is no words at all.”

And there you have it.