Posted on November 3, 2014 by Campaign Outsider

From our Why Not Just Set Your Money on Fire desk

As you splendid readers might (or more likely might not) remember, the hardworking staff has dutifully chronicled the per-ad-ulations of one John Haywood, North Carolina rich guy and erstwhile New Hampshire presidential primary candidate.

He ran a two-page ad in the New York Times a month ago that was promptly trashed by a one-page ad in the Times. Something about “Israel hatred rearing its ugly head.”

Regardless, Mr. Haywood is back, according to splendid reader Carrie from Texas, who sent us this note.

My name is Carrie, and I am a resident of a suburb of a suburb of a suburb of Dallas, Texas. I recently had the (dis)pleasure of receiving in my mailbox a political ad – more like manifesto – which was “written, printed and postage paid for by John D. Haywood”. The flyer itself, which is interesting and somewhat disturbing, is titled “Common Sense MMXIV” and its stated purpose is to “Turn 20 Now Red Texas Congressional Districts Blue and hand a Mandate for Reform to a Democratic House Majority”.

Carrie helpfully included the flyer Haywood has inflicted upon the good people of  Texas. Here’s one side:

And here’s the other: 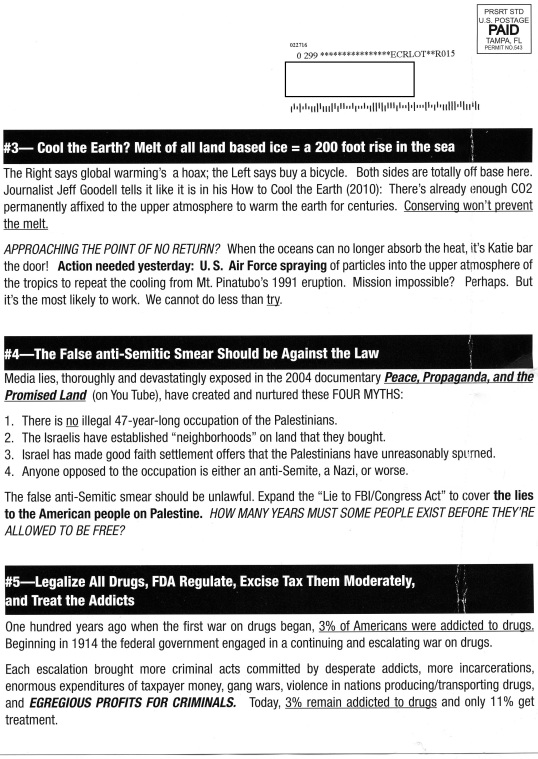 Coincidentally, the day after we received Carrie’s note, Jon Stewart was broadcasting The Daily Show from Austin, Texas, and he delivered this rumination on the prospects of the Lone Star State turning blue:

Pretty funny – but not a word about John “Common (Non)Sense” Haywood.

Somebody tell Jon Stewart he doesn’t know everything, yeah?

Splendid reader Carrie also included this in her email:

After reading this garbage, I decided to do some research on Mr. Haywood. This research first led me to Mr. Haywood’s 2012 presidential campaign website. I also discovered some very interesting stories regarding a lawsuit that Mr. Haywood filed against St. Michael’s College in Vermont and two journalism students who attended college there at the time . . .

It turns out that Mr. Haywood was a Republican-turned-Democrat who decided to get on the New Hampshire Democratic primary ticket for the 2012 Presidential election. Evidently his friends and associates back in Durham, North Carolina, all of whom were Republicans, did not know that Mr. Haywood was running for president as a democrat. Two St. Michael’s College journalism students did a profile of Haywood for a class project, and Haywood subsequently sued the school and the students claiming that they “outed” him as a Democrat to his friends and also misrepresented his platform. You can read about the case yourself [see here]; it is quite entertaining – especially given the fact that Mr. Haywood is an attorney.

3 Responses to ‘Common Sense’ John Haywood Kind of Lacks It