Posted on September 30, 2014 by Campaign Outsider

What Does New England Have Left? 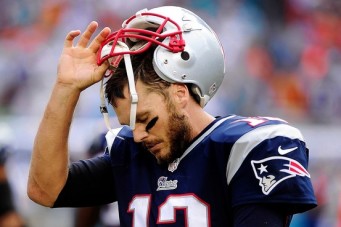 Over the weekend, the Boston Red Sox and their fans bid adieu to non-football-playing sports human Derek Jeter in a mildly strange but well-intentioned farewell behind enemy lines. Fenway Park has hosted some muted goodbyes to legends—when John Updike watched Ted Williams scurry off with a home-run blast in 1960, there were just 10,453 on hand on a day the author described as “overcast, chill and uninspirational.” Sunday’s tribute to Jeter, a long-admired nemesis, featured better weather and a more robust crowd . . .

If a gracious Jeterfest was a surreal look for Boston, so is the current insecurity surrounding the local football concern, the New England Patriots. On Monday evening, Bill Belichick’s Outerwear Fashion Superstore visits the Kansas City Chiefs at Arrowhead Stadium, and though the season is young, and the Patriots are a reasonable 2-1—the Jacksonville Jaguars would surrender all their cat chow and cat toys to be 2-1—there is a whiff of anxiety surrounding a team that has made the playoffs 10 of the last 11 seasons.

My beloved Massachusetts became a state in 1788 with the expressed mission of putting at least two Dunkin’ Donuts on every corner from Stockbridge to Boston, but it has been a sturdy house of football worship for a decade and a half. In that period, the conversation has seldom been if the Patriots will win, but how the Patriots will win, and despite some soul-crushing postseason losses, including two in Super Bowls to Eli Manning, the football Bucky Dent, regional confidence has endured like the wind off Nantucket Sound.

And then last night the Pats submitted this:

KANSAS CITY, Mo. — The defense was gashed, the offense largely went nowhere, and the Patriots were embarrassed Monday night in one of the most lopsided losses of the Bill Belichick-Tom Brady era.

The Chiefs drubbed the Patriots, 41-14, in a game that only raised more questions about the personnel on the Patriots’ roster as well as the coaching, and whether either is good enough to bring a perennial playoff contender back for another deep postseason run.

Gay ol’ conclusion (before the Arrowhead Massacre): “This New England era may not be ready for a respectful farewell. But it’s unclear how many at-bats they have left.”