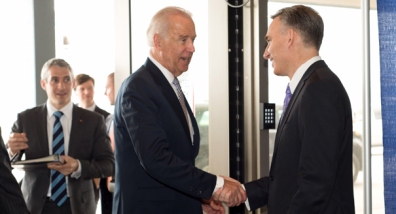 Vice President Joe Biden has been crisscrossing the country attending closed-door fundraisers and donor events for Democratic House candidates — but you won’t find many on his schedule.

In Seattle, Biden worked a photo line at Boeing Field before taking off on Air Force Two. In New York, Biden hit up donors at a hotel in lower Manhattan after addressing the Goldman Sachs energy conference. After a speech in a Philadelphia hotel ballroom, Biden slipped off to a separate room to meet with campaign donors.

None of these side events were on the official public schedule — and they came with strict rules from Biden’s office for the elite group of participants: No emails. No Facebook or Twitter posts, before or after. Phone is best, they tell everyone involved. Nothing written at all — that would complicate security and require approval from the White House.

Most transparent administration in history, eh?

Some of the events are indeed “fundraisers,” said a Democratic Congressional Campaign Committee aide, though “some of them are donor maintenance events.”

So, what – George Soros gets his spark plugs changed?

It’s depressing to think how stupid politicians think we are.