Posted on August 6, 2014 by Campaign Outsider

Full Disclosure #1: The hardworking staff currently teaches at Boston University and does not have tenure.

Back in the day, we regularly collided with Dr. Silber on WCVB’s Five on Five (which, lamentably, seems to have fallen off the digital grid), where we routinely accused him of promoting, say, social engineering only to see him go from zero-to-high-dudgeon in roughly six seconds.

It was great fun.

In subsequent years, Dr. Silber was unfailingly gracious whenever we encountered him, which doesn’t mean squat to the many BU faculty he Terrier-ized during his reign, but that’s another post entirely.

This post is about his posthumous publication, Seeking the North Star, which New Criterion editor Roger Kimball reviewed in Monday’s Wall Street Journal.

In his tonic foreword to “Seeking the North Star,” a wide-ranging selection of Silber’s speeches, Tom Wolfe notes that, at 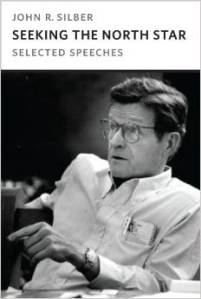 BU, Silber transformed “a moribund streetcar college into a major teaching and research institution,” building its endowment to some $430 million from $18 million. He stocked the faculty with world-class talent, including Nobel laureates Elie Wiesel, Derek Walcott, Saul Bellow and the physicist Sheldon Glashow. Unambiguous grounds for celebration, you might think, but that would be to neglect politically correct mediocrities such as historian Howard Zinn, who was for decades a fixture at BU and with whom Silber often clashed.

Silber was often labeled “conservative.” In fact, and as he always insisted, he was a liberal of the old school. He believed in advancement according to merit, not quotas; colorblind justice; the disinterested pursuit of truth; and open debate, not ideological conformity. This commitment to what we might call classical liberalism—the liberalism of an Edmund Burke or John Stuart Mill —forms an important leitmotif of “Seeking the North Star.” It also explains why Silber was from the beginning on a collision course with the faux-liberalism, the illiberal liberalism, of contemporary academic culture. “No institution,” he writes sadly, “has contributed so extensively to the deracination and diminishment of our humanity as university faculties.”