The prolific author Peter Matthiessen died last week and the obituaries came fast and, in some cases, loose. 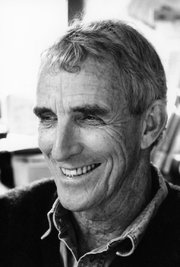 setting of Mr. Matthiessen’s novel “At Play in the Fields of the Lord.” It is set in Peru, not Brazil. The obituary also referred incorrectly to Mr. Matthiessen’s book “In the Spirit of Crazy Horse.” While Mr. Matthiessen and the book’s publisher, Viking Press, were sued for libel damages, Viking did not “withdraw the book” as a result. And it also misstated the given name of one of his sons. He is Lucas, not Lukas or Luke.

In addition, the Sunday version of the obituary misspelled, in one reference, the surname of Mr. Matthiessen’s first wife, who died in 1998. As the obituary initially noted, she was Patsy Southgate, not Southgage. And the version on Sunday misidentified the school that Mr. Matthiessen and George Plimpton attended together. They went to St. Bernard’s in Manhattan, not the Hotchkiss School in Connecticut.

Yeah – that’s a lot of misstating and misspelling and misidentifying.

And while we’re at it, there’s this from the Times obit:

Mr. Matthiessen’s fifth novel, “Far Tortuga” (1975), was inspired by a New Yorker assignment in which he reported on the vanishing Caribbean tradition of turtle hunting. Highly experimental — it drew on recordings of sometimes cryptic Caribbean dialogue — the novel drew mixed reviews.

Mixed reviews maybe, but not from the Times, in which Roger Stone, author of Dog Soldiers, wrote this in 1975: “Peter Matthiessen’s fifth novel, ‘Far Tortuga,’ is a singular experience, a series of moments captured whole and rendered with a clarity that quickens the blood.”

So what’s needed here is a Campaign Outsider Official Tiebreaker®.

Far Tortuga is a tour de force, easily the equal of Ernest Hemingway’s The Old Man and the Sea, which is more over-valued than Bitcoins.

But that’s just us.