As night fell last Friday in Kuala Lumpur, businessman Philip Wood hurried to gather his bags for a trip to Beijing. He had confused the dates, but his girlfriend in China texted him to make sure he got on the plane.

A group of Chinese artists capped off their exhibition at a local cultural center in Malaysia’s capital city with a day of sightseeing and a banquet lunch of duck soup, fried shrimp and 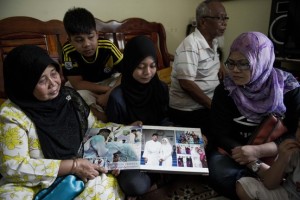 Norli Akmar Hamid finished packing for her long-overdue honeymoon and posted a photograph on Facebook of her cat trying to sneak into her suitcase. The cat chewed the lining near the administrative assistant’s neatly folded blue T-shirt and beige towel.

All of them boarded Malaysia Airlines Flight 370 late Friday night and flew away shortly after midnight in the tropical night sky toward Beijing. Soon after, the widebody Boeing 777 jet carrying 239 people vanished from radar screens.

Flight 370 took off carrying 239 life stories, each filled with moments big and small, ordinary lives soon to be swept up in a tragic mystery. Now, as the hopes for a miracle fade by the day, memory transforms the random and routine into the meaningful and momentous.