BPL Gets Some Love from NYT

Posted on March 9, 2014 by Campaign Outsider

The Boston Public Library got a spotlight dance in Saturday’s New York Times.

Breaking Out of the Library Mold, in Boston and Beyond

BOSTON — An old joke about libraries goes like this: A boy walks into a library and asks for a burger and fries. “Young man!” the startled librarian reprimands. “You are in a library.” So the boy repeats his order, only this time, he whispers. 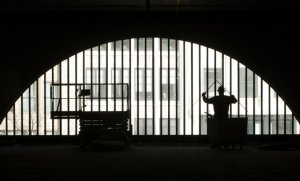 scene may not be so far-fetched. Many libraries have become bustling community centers where talking out loud and even eating are perfectly acceptable.

The Boston Public Library, which was founded in 1848 and is the oldest public urban library in the country, is moving rapidly in that direction. With a major renovation underway, this Copley Square institution is breaking out of its granite shell to show an airier, more welcoming side to the passing multitudes. Interior plans include new retail space, a souped-up section for teenagers, and a high-stool bar where patrons can bring their laptops and look out over Boylston Street.

“You’ll be able to sit here and work and see the world go by,” said Amy Ryan, president of the library, on a recent tour. “We’re turning ourselves outward.”

All the way to the Big Town. And to the 21st century, apparently.

That will be evident at the Boston library’s new section for teenagers. Teen Central is to become what is known as “homago” space — where teenagers can “hang out, mess around and geek out.” It will include lounges, restaurant booths, game rooms and digital labs, as well as software and equipment to record music and create comic books. The vibe will be that of an industrial loft, with exposed pipes and polished concrete floors, what Ms. Ryan called “eco-urban chic.”

We just don’t want to be around when they tell that to the Back Bay Hysterical Society.

4 Responses to BPL Gets Some Love from NYT