Posted on November 12, 2013 by Campaign Outsider

From our Late to the Pizza Party desk

It’s only taken the hardwalking staff a month and a half to notice this, but the Great BU 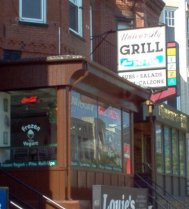 Pizza War is over. The slice-off between the venerable University Grill and the upstart Comm. Ave. interloper Sal’s Pizza began about two years ago, as the hardmunching staff chronicled and sampled.

But Yelp don’t lie (much), and it turned out to be no contest between U-Grill and Sal’s when it came to customer reviews. (Sal’s got all of three reviews in two years.)

And so . . . here’s the end result, via Boston Restaurant Talk:

A local chain of pizza places that has been expanding through the Boston area over the past several years has closed one of its locations within the city.

According to a post on Twitter from @sportsgirlkat, Sal’s Pizza on Commonwealth Avenue by Boston University has shuttered, with a check on the Sal’s website confirming that it has indeed closed down (the site refers customers to shops on Brookline Avenue in the Fenway and Tremont Street in downtown Boston). 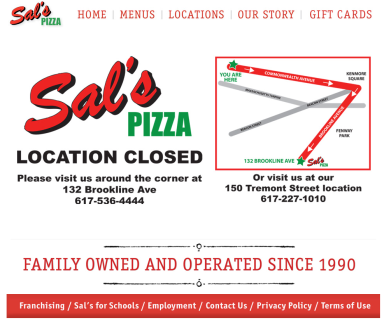 It seems to the hardjudging staff that this is a just and proper outcome, and that Sal’s should never have moved in next door to the U-Grill bros.

Now we need a small fries to go.

2 Responses to U-Grill Has Won The Great BU Pizza War!