A Flashback, Bahrs None

Posted on October 18, 2013 by Campaign Outsider

My family also had a bungalow at Sandlass Beach, where we spent every summer we could. It was under the Tanger name and fronted on the elevated boardwalk that ran down the center of the bungalow colony. I am interested in obtaining copies of any photos of the bungalows.
I have several but they are all closeups of people standing in front of our bungalow. I am looking for shots of the boardwalk, Sandlass beach, the Bamboo Room or such…
Many thanks for posting this! I was deployed by FEMA for three months after Sandy and one day took the ferry over to Highlands and walked over to the old bungalow site. It was a heartbreaker, I can assure you. We grew up in a perfect little paradise.

Ditto, as we previously noted.

We were the East Side Carrolls, eight of us living in a three-room apartment at 89th & 3rd in the Big Town. The rest of the Carroll Clan lived in three-bedroom apartments in the Hell’s Kitchen projects on the West Side.

But every summer we all joyfully migrated to the Jersey Shore, where the East Side Carrolls occupied a three-room bungalow (with two porches that doubled as bedrooms) on the Sea Bright side of the Shrewsbury River, while the rest of the Carroll Clan occupied bungalows on the Highlands side.

There was a thoroughly comforting symmetry to it all.

And an additional cheerful symmetry to our summers in the bungalow colony (at upper right) alongside the Sandlass Beach Club (an oral history of which is here). 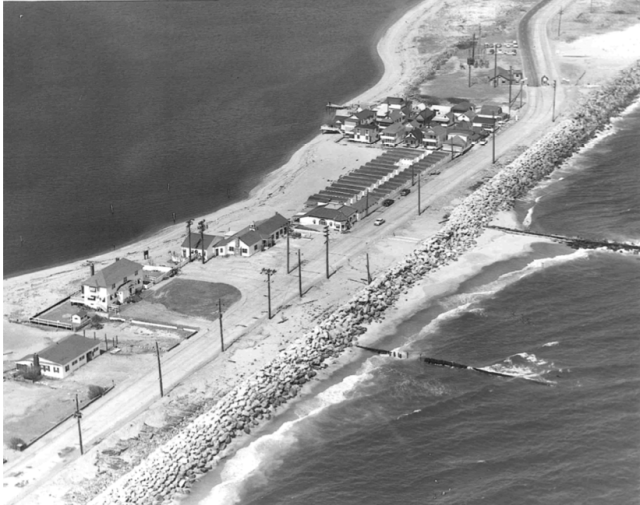 There was the Shrewsbury River on one side of us, and the Atlantic ocean on the other.

As the hardswimming staff recollects, it was always high tide somewhere during those blissful summers.

2 Responses to A Flashback, Bahrs None