Posted on August 5, 2013 by Campaign Outsider

From our Been There Done That desk

Time Warner Cable is embroiled in yet another retransnsmission battle, this time with CBS in New York, Los Angeles, Dallas, and elsewhere.

CBS has gone dark in some of the largest media markets.

Unable to reach a contractual agreement by their Friday, 5 p.m. deadline, Time Warner Cable dropped the No. 1 primetime network in New York City, Los Angeles, Dallas and several other markets.

The cable networks owned by CBS – Showtime, TMC, FLIX and Smithsonian – also were taken off the air in these markets, where about 3 million customers subscribe to the nation’s second largest cable TV provider.

CBS promptly took out this full-page ad in the New York Times: 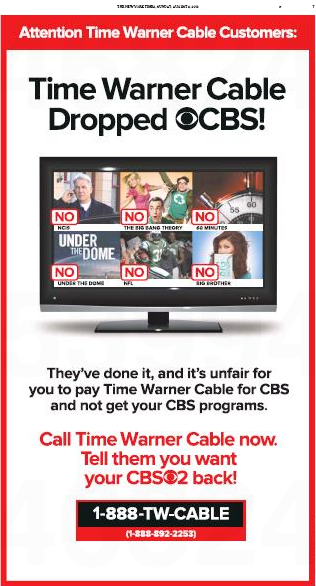 But Time Warner Cable has hit back with this TV spot:

More, no doubt, to come.