So the Missus and I trundled down to the library-lively Boston Athenaeum to catch its George Deem: The Art of Art History exhibit.

And it’s a corker.

George Deem (1932–2008) had a unique vision of the masterpieces of the past and a passion for the history of art in general. This combination inspired him to create paintings that are both visions and revisions. This exhibition focuses on that part of Deem’s oeuvre for which he found specific inspiration in two favorite sources: paintings by the seventeenth-century Dutch master Johannes Vermeer and those by American artists such as Winslow Homer and John Singer Sargent. In his analysis and interpretation of these artists’ works, Deem made his own, important contribution to the history of art. 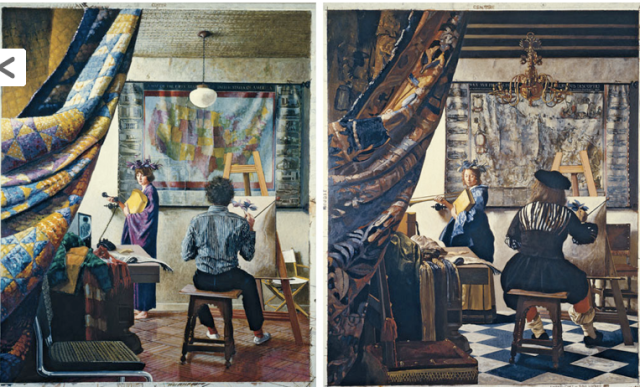 For the right half of this complex and impressive diptych, Deem replicated, at actual size, Vermeer’s masterpiece, The Artist in His Studio (The Art of Painting) (ca. 1666–67). In order to call the viewer’s attention to the “truth” about what he or she is seeing, however, Deem left a border of unpainted canvas. At left, he repeated Vermeer’s composition but altered the details. The map of Holland is exchanged for one of the United States (surrounded by images of American museums); the curtain becomes an American quilt; the sixteenth-century chairs are now modern; and the female model trades her gown, book, and horn for a Japanese kimono, a copy of the Yellow Pages, and a telephone. Completing the transfer, the artist, who may or may not be Vermeer in the original, morphs into Deem himself.

Deem rarely copied another artist’s work wholesale, and when he did, he always had ulterior motives. (This is seen in his great Vermeer-based diptych on the wall behind you.) More often, Deem took elements from one or more of Vermeer’s paintings and rearranged them within a single space, also adapted from an original by Vermeer. Sometimes, Deem even expanded that space in order to get, literally, “the big picture.” In The Red Chair, Deem borrowed windows and a chair from Vermeer’s The Music Lesson (1662–65; The Collection of H. M. Queen Elizabeth II) and a map and another chair (the red one) from Vermeer’s Artist in His Studio (The Art of Painting) (1666–67), referenced elsewhere in this gallery. Deem’s baseboard tiles come from Vermeer’s A Lady Standing at a Virginal (ca. 1672–73; National Gallery, London). Thus, Deem distilled and reinvented Vermeer’s genre paintings—his famous recordings of everyday human activity—into beautifully composed still-lifes that, as critic Charles Molesworth has put it, represent “the absence of presence.”

The absence of presence.

As is everything in this knockout of an exhibit.