Lucian Freud, Chaim Soutine, And ‘Flaying Them Alive In Paint’

The death of artist Lucian Freud has put “arguably one of the UK’s most highly regarded and respected artists” (according to the BBC) in the popular culture spotlight. But it sure seems Freud isn’t experiencing the harsh glare his artistic subjects were subjected to.

From Michael Kimmelman’s mash note in the New York Times:

[T]he best of the portraits take their place in the history of painting. A few American critics, addicted to anything new, have moaned that his sullen and fleshy figures put him out of step with where contemporary taste was headed. Never mind that tastes changed over his long career so that he went in and out of fashion, and finally in again, the art market eventually making him a very rich man. That he sometimes squandered those riches at the track was his business. A commission could always set him straight.

Mostly, though, he declined commissions, painting only friends and family and those he chose himself. Models had to spend weeks, months, years sitting for him. The process entailed painstaking relationships. Doubters surmised that Lucian returned sitters’ patience and generosity by flaying them alive in paint.

The hardworking staff is no art critic, but for our money Freud can’t hold a candle to Chaim Soutine, the 19th Century Lithuanian-born French Expressionist Painter, who did some serious “flaying them alive in paint” himself – including himself.

(Sorry – largest image we could find.)

Supersize them – it’s worth it.

P.S. Funny, though, how the Times photograph of Lucian Freud resembles his paintings: 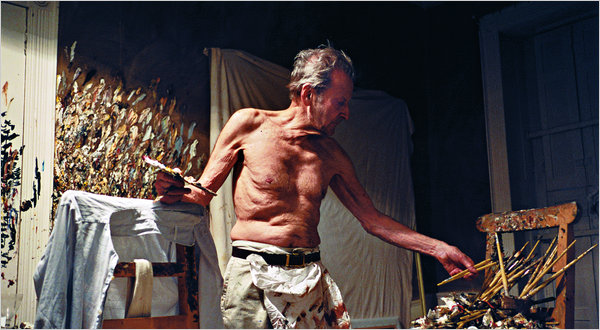 2 Responses to Lucian Freud, Chaim Soutine, And ‘Flaying Them Alive In Paint’