Posted on October 21, 2016 by Campaign Outsider

Throughout the 2016 presidential campaign, The Weekly Standard has been a standard-bearing Dump Trump hardliner.

Variations on the same basic conversation are, no doubt, taking place all over the country: people asking, rhetorically, “How has it come to this?” Agonizing over what, if anything, can be done. Wondering, “Does it really have to be one of these two?” Sooner or later you come to the dead-end answer, which is .  .  . “Yes, it seems it does.”

So you begin to fantasize. Wouldn’t it be great if it could be—and here you fill in the blank. Someone, say, from history. (My first choice would be Calvin Coolidge.) Or someone from the à la carte menu of contemporary politicians. This would include all the usual suspects, according to one’s ideological tastes: Elizabeth Warren, Bobby Jindal, Mitt Romney, whoever. 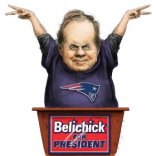 lazy football Sunday, “How about Bill Belichick for prez? You want a winner and someone who knows how to deal with the media .  .  . he’s your guy.” (For the uninitiated, Belichick is the most successful pro football coach of our generation.)

“Ur rite,” I texted back. “Brilliant. Guy has forgotten more about ‘winning’ than Trump ever knew.”

Norman also had this exchange with his texting pal:

“Belichick would never say he wouldn’t put boots on the ground. He wouldn’t give away anything about what he might—or might not—do. He’d keep em guessing .  .  . and very, very worried.”

“Absolutely,” I texted back. “Gives the enemy no help. He won’t even say who he is starting at quarterback until the rules say he has to. Always keeps them guessing.”

“Right,” my correspondent texted back, fast and furious. “But if he did put boots on the ground, they would stomp the bad guys into a puddle and then stomp the puddle dry. Belichick isn’t about sending signals. He is about stealing yours and using them to beat you.”

From there the piece wanders into a discussion about America’s fetish for charisma and what a welcome change an anti-charismatic leader would be. It is, as always with Norman’s work, an interesting read.

Back to Belichick for President, though, the hardchuckling staff guesses that The Big Hoodie’s response would be, “we’re on to Pittsburgh.”